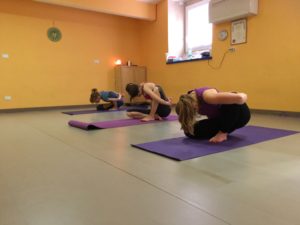 Ashtanga Vinyasa is one of the traditional trends of classical hatha yoga, a powerful dynamic style that is based on fixed sequences of asanas (series). Asanas are linked with each other by a Vinyasa – moves in a pace of one’s own breathing. Asanas are performed with Drishti (a specific gazing direction for the eyes to control attention), bandhas (strain specific muscle groups) and pranayama (ujjayi – a special kind of breathing). Most of the asanas are held for 5 breaths (a few decades ago were held for 8 breaths). Usually, the performance of the next asana in the sequence is allowed only after mastering all previous. The practice includes a wide range of physical exercises of yoga, which allows development of physical and mental and spiritual balance.

For a long time the Head of the traditional school of Ashtanga Vinyasa Yoga was Sri K. Pattabhi Jois. He gained the knowledge from his Guru – Sri Tirumalai Krishnamacharya, who – in his turn – was a follower of Sri Rama Mohan Brahmachari.
After the Gurudji passed away few years ago, the successors of the traditions have become his grandson Sharath Jois Rangaswamy and daughter Saraswathi Rangaswamy.

Each sequence consists of:
* Surya Namaskar A and B 5 times each
* Standing Asanas
* The main unit (series)
* Block finishing asanas

Despite the dynamic style, this yoga fits everybody, there are no restrictions neither in age, nor in physical fitness level.
Newcomers gradually modify the sequence of asanas and add new ones only when feeling ready to implement them. The constant practice changes the body, removing the clamps.
Usually, the first lesson is about learning to breathe correctly (ujjayi), starting with Surya Namaskar A and B, then doing a block of standing asanas and (if possible) – few sitting asanas, then the practitioner immediately goes to the final block. 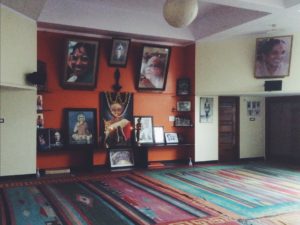